Passive fire protection is used and designed to delay the heating effect a potential fire can have on the exposed part(s). Structural steel maintains its tensile strength up to a certain temperature, after which the tensile strength starts to deteriorate. Although the melting temperature of steel is above 1300°C, it loses its structural integrity between 550°C and 620°C when fully loaded and it may have lost 10% of its strength already at 400°C.
The critical steel temperature and the duration (time) to reach this temperature when exposed to a fire, are the two main factors used in the design of the PFP solution. However as the effect of a real fire scenario is virtually impossible to predict or model up front, certain defined fire scenarios with given temperatures and scale are used in testing and certification of PFP solutions.

A jet fire scenario is a fire caused by release of high pressure hydrocarbons (gas) from an erupted pipe or vessel under pressure. The jet fire test generates a higher temperature and a higher heat flux, ranging from 250 kW/m2 to 350-500 kW/m2 (note 1) 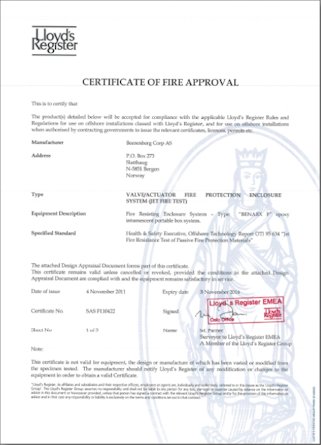 depending on test standard used. The jet fire test method is defined in the ISO 22899-1 and OTI95-634 standards. It's worth noting that the test standards specifically refer to testing of structural steel, where the test criteria is to measure the time to the defined critical temperature of the steel is reached. The critical steel temperature used for testing is in most cases 400°C. It's a common practice to use the same test set-up and critical temperature for tubing and other process equipment.

The testing of passive fire protection solutions should be carried out in certified test facilities and the test certificates must be issued by accredited bodies such as Lloyds, SP Fire Research, ABS etc.
To be able to design PFP to a specific/project specification, the results obtained from the tests are used as data set for the calculations. Various thicknesses of PFP material are tested and the time to reach the critical temperature is noted. It’s a commonly approved practice to interpolate results (i.e. calculate a theoretical line between two know points) between certified test results to optimize the thickness of the PFP layer towards the requirements, but it’s generally not accepted to extrapolate results (i.e. calculate a line outside certified points).

Note 1: A test standard for testing jet fires with 350 kW/m2 heat flux – HHF Jet Fire test, is currently not defined, so the current practice is to use the test set-up for 250 kW/m2 based on ISO 22899-1 and increase the temperature in the furnace to a calculated (Black body) temperature that generates, a heat flux of 350 kW/m2. As one important factor in a jet fire test is the erosion factor of the surface material due to the high speed/turbulence of the ignited gas flow, different results can be experienced based on which test method that is used